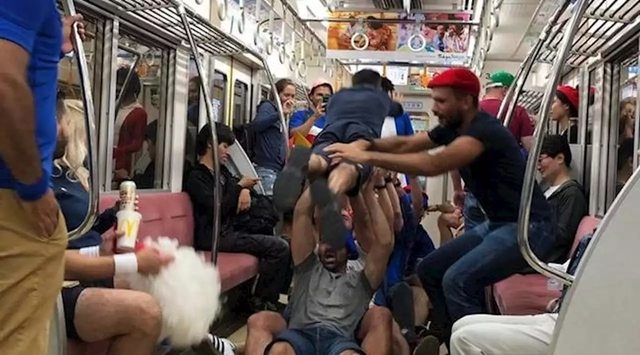 [October 6th AFP]
While the Rugby World Cup 2019 (Rugby World Cup 2019) is showing excitement, public manners are extremely important for the nuisance behavior of some foreign fans who enjoy the human pyramids and rugby pretend on the train Voices of criticism are rising among Japanese host countries and Japanese people.


Two weeks have passed since the opening of the tournament. The popularity of rugby has started in Japan, and foreign teams and their fans have been greeted with a warm welcome in Japan.


On the other hand, some foreign rugby fans who have gone too far are buying acts on the Internet or being criticized by the media for acts contrary to Japanese social norms that require order.

For example, in the train of Sapporo City Subway Toho Line, there are 6 groups of foreigners wearing shirts from Australia's Wallabies who make and assemble a human pyramid. A Japanese user who posted this video on Twitter commented, “If you got on the Toho Line, it was n’t Japan.” The video was viewed nearly 300,000 times. There are many critical comments such as “just annoying acts” and “the shame of traveling is an insult to the country we visited”.

The human pyramid is not the only nuisance that attracts attention. Foreign fans sitting on the floor in the train are also spreading videos of crowdsurfing, where several people support and move the male body above their heads, and videos of supporters singing loudly.

In addition, a video of foreign fans passing a yellow ball on the train and tackling rugby such as "Do not do it in the train. This is foreign Japan." “Please come after studying,” while comments such as “I can forgive you because you can laugh.”

Japanese media jumped into this turmoil and was featured on TV as “Rugby fans make trains dangerous”.

Officials have explained that the rules prohibiting other passengers from being annoying are provided for the safety and comfort of all passengers.

However, positive reports and emotions as a whole exceed the criticism of this Rugby World Cup, host country Japan, foreign teams and foreign fans who came to Japan. The venue was full even in the games between the lower ranking countries, and it was further spurred by the fact that Japan won a dramatic victory over a superior Irish opponent.

The foreign teams have adopted Japanese customs such as bowing to the fans after the game and cleaning the locker room, and they are praised by the Japanese.